The Difference Between a Messianic Congregation and a Church | Episode 20 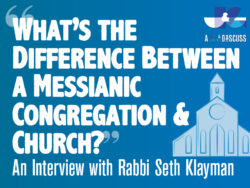 So, what’s a Messianic congregation really like? And how do you decide if you should go to one?

In today’s episode of A Jew and A Gentile Discuss, Ezra and Carly talk with Rabbi Seth Klayman about the why and how of Messianic congregations. Who’s Seth Klayman, you ask?

Seth is a second–generation Jewish Believer in Jesus, which means that, given this time in history, his parents were a part of pioneering modern Messianic Judaism in America. Seth earned his degree in Jewish Studies at Ohio State University. He also studied at Oxford University and later in Israel and earned his Masters and PhD. from Duke University. He now leads Sha’arei Shalom Messianic Synagogue in North Carolina and has some insightful things to say about identity, worship expression and what that means to Jewish and Gentile Believers.

Carly goes on to ask Seth a question that other Gentile Christians may secretly be asking too:

As they discuss, you’ll also learn